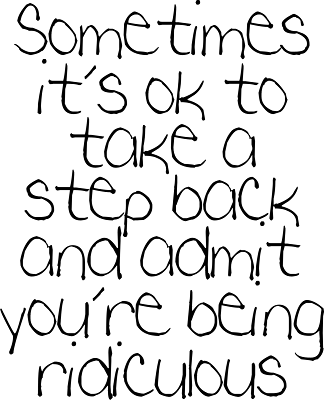 I have this old hotmail account that I haven't really used in more years than I can count. It comes in handy when I order something online or don't want to give the email address I actually use. It's the address I use to keep all the spam out of my actual email account. lol!

Well, today for some reason I can't explain I felt like I needed to check that account. I was so excited to see the first email cause it was from a friend that I haven't heard from in years. As a matter of fact, it's been so many years that I can't exactly remember what year it was the last time we talked. All I know is that I've missed her and I'm so glad she emailed me!

I quickly responded giving her the short and sweet updated bio of my life and emailed my phone number for her to call when she could. Then I happily went on to delete the hundreds of spam emails that were collecting dust in that account.

Except, not everything was spam! After I deleted the first page of junk I found a bunch of emails that had been returned as "undeliverable" over the last couple of days. I was seriously confused because I hadn't emailed anyone from that account. Then it hit me~ My hotmail account was the victim of that stupid hacker/virus thing where everyone in your contact list is emailed a link they shouldn't click on and it looks like it came from you. UGH!

I didn't know what to do so I logged out of hotmail and got some ice cream so I could think it through.

I finally decided that the "undeliverable" emails were a good sign. It meant that the owners of those email addresses were safe and hoped that anyone who actually received the fake email was smart enough not to click on the bogus link.

Then I thought about my old friend and how I had emailed her my phone number. I started wondering what it would mean if she never called or emailed again. I figured it could mean...

A) She was busy and didn't have the time.

B) She just didn't care.

C) The email wasn't really from her and I had sent my phone number to the hacker/virus link thingy.

I really hoped it wasn't option B or C and then I had to put some caramel syrup on my ice cream.

I tried to log back into hotmail but I was locked out because of the "suspicious" activity. After proving that I really am who I am and changing the password I was able to log back in and found another email from my friend. It was her and she did care and I hadn't email my phone number to some wacko.

I wanted to email an apology to anyone else that may have gotten that stupid link thingy, but I have forgotten how to even see who my contacts are in hotmail. lol! So, if you happen to be someone that I knew a really long time ago and you've recently received a strange email from me ~ I'm sorry!

Then, in my actual email account I found emails asking what the heck I was talking about yesterday with my view and the cosmetic surgery. I got really scared cause you guys usually get me and I began to wonder if I had been hacked too. I considered getting more ice cream while I figured out if I was really me or if I had been hacked, but decided to do a quick check instead.

3) I still have an unexplainable crush on Russell Brand

The good news is that I'm me! I haven't been hacked!

The bad news is that I now have to explain yesterday's post. Guess I should have gone out earlier in the day to take pictures so you could see all the torn up concrete everywhere, but I wanted the rays from the setting sun. So, here goes...

I was actually talking abut my view!

The cosmetic surgery is the construction work that 's going on.

The bragging is the stupid machines that are out there tearing up the concrete every morning without fail.

The wall it's built around itself is the concrtuction fence that's been put up.

Sorry, for the confusion!

I have about 13 days before I have to set foot in my class room again and today my phone was going crazy with text messages filling me in on the latest gossip ~ The office in my building will be closed and we'll only have the office on the main campus ~ We're getting a new assistant principal.

At this point I decided there wasn't enough ice cream in the world to get me through the day and I decided to take a nap! Now I'm wide awake and don't know if I'll get to sleep tonight or not.

Maybe that's a good thing! I can sleep through Friday and avoid more drama. lol!
Posted by Ginger at 12:04 AM 8 comments: Links to this post