Time you catch you up a little...

I promised to catch you up on some things, but I'm so tired right now I can't remember many of the things I wanted to share.  I really need to start taking notes!

We celebrated the 100th day of school today which is always fun, but very exhausting. 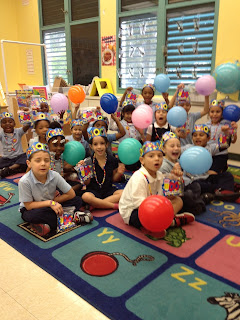 I have some news to share that's sad for me, but wonderful for some lucky teacher in Broward County.  Sebastian is no longer attending my school.  His mom brought him by last week to see me and say bye.  They moved awhile back and he's going to a school that is closer to where he lives.

I'll still be in touch with them through emails, text messages and Facebook so I'll have updates to share.

I told his mom that even though he's in first grade now and I didn't get to see him everyday I just liked knowing he was on campus.  I managed to hold back the tears while we said our good byes, but as I watched him skip away beside his mom it was more than I could handle.  The tears starting flowing and my class tried to cheer me up by saying, "It's ok, we'll be here tomorrow."  Isn't that just the sweetest thing?  It made me want to cry even more.

Here's a picture I snapped of Sebastian before he left.  He's showing off his fancy new arm brace... 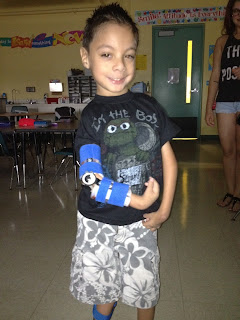 A couple of weeks ago we went to TattooLaPalooza where there were lots of interesting people who were willing to pose for photos.  Lonely Girl was with me and I thought it would be a great place for her to meet someone ~ LOL ~ But unless she was sneaky, like she was at the Renaissance Festival, she didn't find anyone. 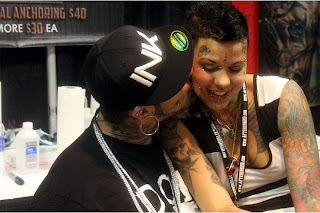 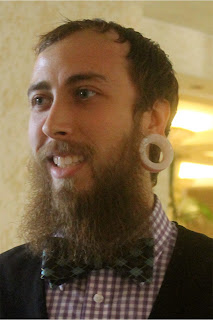 At one point, Lonely Girl considered joining the hundreds of people who were there getting a tattoo and get one herself.  When I joined the conversation she was having with the tattoo artist Lonely Girl asked me what I thought.

It's been a couple of weeks since we went and I may have some of our conversation wrong now, but this pretty much sums it up...

Lonely Girl:  Ginger, I'm thinking about getting a tattoo.  Talk me out of it.

Lonely Girl:  You're supposed to keep me from making bad decisions.

Lonely Girl: I always make bad decisions when I go out with you.  Like that bad date I went on.  (She was talking about renaissance man)

Me:  You can't blame me for that.  I didn't know about it until after it was over.  If I had known about it I would have said, "Stay away from that man, he's wearing a dress!"

Lonely Girl: It was a skirt.

Me: Oh, that makes it better!

The tattoo artist and his friend were laughing at us and trying to figure out if we were being serious or if we were trying out a new comedy routine.

Sadly, we were being serious.

I also went to Panther Ridge Conservatory in Wellington, Florida where they have some beautiful cheetahs, leopards, jaguars and other wild cats.  Yep, right there in the heart of horse country, they have all these beautiful animals. 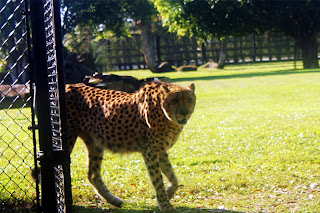 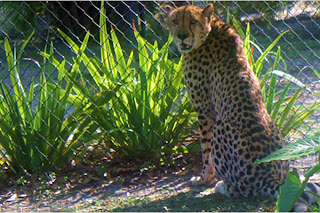 On Saturday we hit up the 5k foam run at Amelia Earhart Park.  We got there kind of late for a run, but there were still some fun people who wanted their pictures taken. 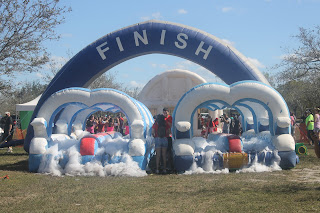 I have some funny photos from this event, but blogger isn't playing nicely right now, so I'll have to save those for later.﻿

At school, we met with the lady who is going to help us with our garden project.  I pointed out that I know NOTHING about growing ANYTHING and she assured me that I would be fine.  She seems to think that we're going to be turning all of our students and maybe even ourselves into vegetarians.  I'm not so sure that will be happening!

At one point, she suggested I google vegetarian recipes and try a new one everyday.  Another one of the teachers cracked up laughing at the thought of me cooking and I had to explain that not only do I have no idea how to grow food, but that I can't cook it either.

Seriously, why cook when you have a cute fajita delivery guy?

Remember the mangroves we're trying to grow in our classes?  Well, I've already managed to kill off half of mine.  I assured everyone that by March, I'll probably be able to kill off the rest of them too.  It's a good thing I'm not in charge of the Everglades!

When I was told that if any of the mangrove seeds had died there were some we could replace them with, my first question was, "How do you know if they're dead?"  My second question was, "I have two that are in water that turned completely black. Does that mean they're dead?"

On the bright side, one of my mangrove seeds has started to grow a tiny little, you almost need a magnifying glass to see it, itsy bitsy bud.

I was so excited when I saw it that I ran around showing it off to everyone even though they actually have full on baby leaves growing on theirs.

I can barely keep my eyes open now, so the rest of my stories will have to wait for another day.
Posted by Ginger at 12:00 AM 6 comments: Links to this post