I called to find out about that stupid $37 ticket I got Wednesday night.  It wasn't because there was no money in the meter and they knew my tags didn't expire until the 15th.  Get ready for this..... 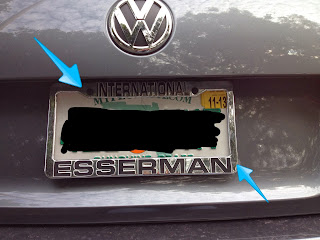 See the frame around my tag?  That's the reason I got the ticket!

The lady I spoke to in the clerk's office clams they are illegal and have always been illegal.  I was just lucky enough to be spotted by a police officer who decided to enforce that law.

As I drove home from work today I counted all the cars I saw with some kind of frame around their tag.  Want to know how many I counted?  Well I'll tell you.....

Well, maybe my count is off by a little because I kept singing along with the songs on the radio and forgetting to count.  But, there were still LOTS of cars with LOTS of frames around their tags.

Don't even get me started on the two cars and truck I saw that didn't even have tags!

I've been told that if I take the frame off, take a picture to prove that it's gone and write a letter explaining what I've done that maybe.....just maybe I won't have to pay the $37.

I've already thought of several things to say in my letter, but sadly, those things will only raise the cost of the ticket. Lol!